Getting to the Sahara in 2 days? You can do it!

For those who can only stay in Marrakech a few days, but they don’t want to give up wandering among palm groves, rocky deserts and oases, we have selected ten excursions lasting 1 day each. Perfect for weekends!
For those who have a few more days and want to go into the imperial cities or stroll among the vast beaches of the Atlantic coast, we recommend 2-day excursions.
And for those who, even with limited time, do not want to give up the profound experience of the Desert there are 3-day excursions, we take you up to Sahara!

Perfect excursions for those who want to enjoy mint tea, stroll among the souks and refresh themselves in the shade of the palm trees of the Imperial Cities or the fairytale oasis of Skoura … and have a few days to do it!

Appointment with driver near your riad / hotel and departure towards Ouarzazate. The road that crosses the High Atlas rises gently up to the passTizi-n-Tichka at 2260m above sea level. You meet villages and places of commercial exchanges witnessing typical scenes of life in the country. You go into the Onila valley and arrive at the Ksar of Ait Ben Haddou, a magnificent example of fortified architecture, typical of the region. After visiting the village, cross the city of Ouarzazate and continue to the lush oasis of Skoura where you can admire the sunset over the palm grove and the valley of the thousand Kasbhas. Dinner and overnight at the hotel

After breakfast we start by going into the oasis of Skoura and, skirting the beautiful mud buildings hidden behind each curve, we reach the Kasbha of Amerhidil inside which you can admire, in addition to the architectural structure and the environments that welcome everyday life, a collection of traditional objects. After the visit, we travel along lunar landscapes on the road to Ouarzazate. Here you cross the city and head towards the Oasis of Fint located in a gorge between two mountains. You find the asphalt road and, through still incredibly different landscapes, you reach the road for the pass and return to Marrakech. Arrival in the city in the late afternoon.

Means of transport of the latest generation (Mini-van or 4×4 with air conditioning) with driver, for exclusive use. During the excursion you will decide where and when to stop in compliance with the road map. Returning to Marrakech, the driver will accompany you to the hotel / riad, to the airport or, near the medina as you requested. 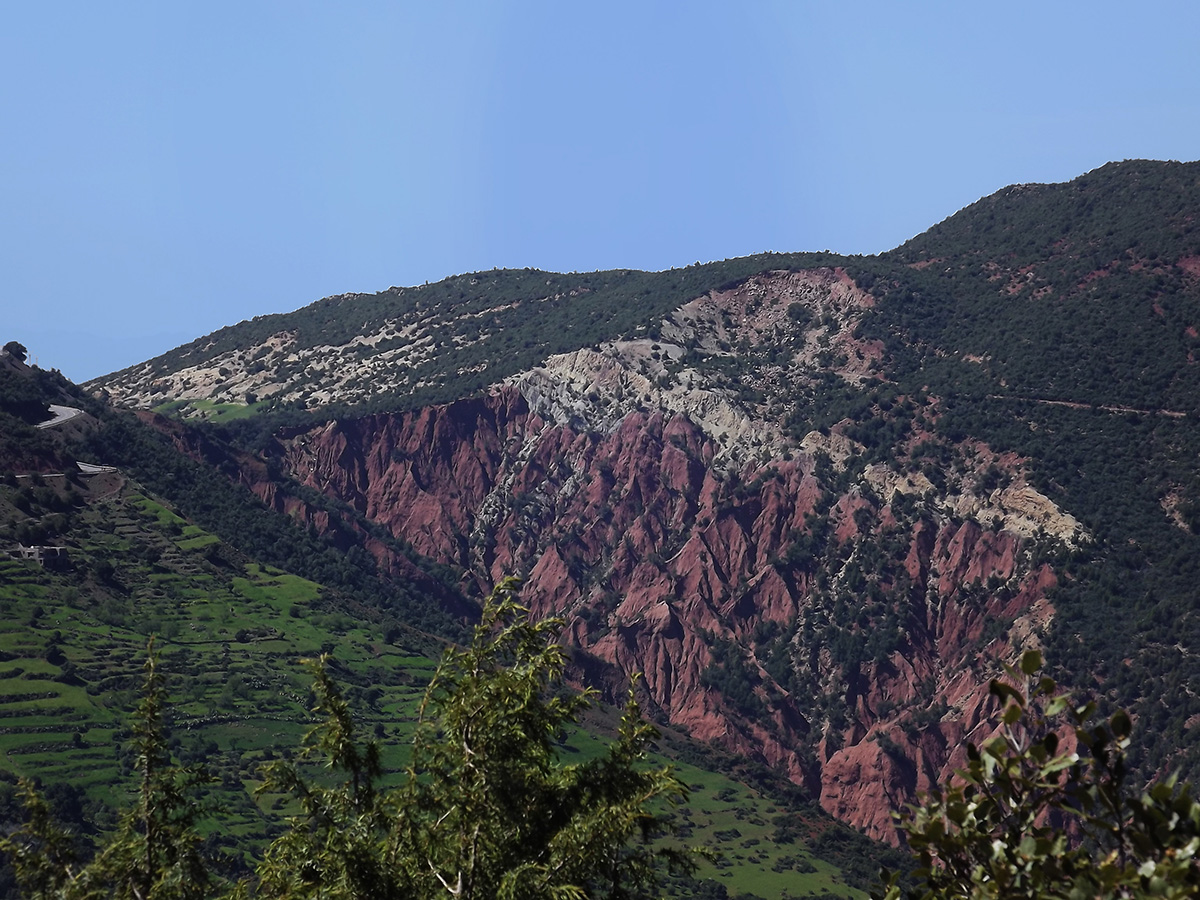 Appointment with driver near the hotel and departure towards the capital Rabat. Arriving in the modern and well-kept city lying on the shore of the ocean and overlooking the mouth of the Wadi Bou Regreg you reach its symbolic site: the Mausoleum of Mohammed V and the Hassan II Tower. Warm-colored clay walls guard the Oudaya kasbah. From the door carved in the ramparts, going up the alleys with white and blue lime walls, you arrive on the Plateforme du Sèmafor, the viewpoint from which, with a single glance, you embrace Rabat, Salè, l’Wadi Bou Regreg and the ocean. Departure for Meknes where we arrive in the late afternoon.
Overnight in riad.

After breakfast, accompanied by a guide, you spend the morning visiting the city: from the imposing Bab Mansour, one of the most beautiful gates in all of Morocco, to the reservoir of the ancient imperial city, a water reserve for palace gardens, from the series of arcades of the stables to the large barns’ rooms, to then move on to the souks where the shops are still divided according to the different craft activities. After leaving Meknes, visit the Roman archaeological site of Volubilis declared a UNESCO World Heritage Site. Departure for Fes where we arrive in the late afternoon. Arrival at the hotel and end of services.


* Where not expressly mentioned the overnight stay is intended organized independently by the client.

Means of transport of the latest generation (Mini-van or 4×4 with air conditioning) with driver, for exclusive use. During the excursion you will decide where and when to stop in compliance with the roadmap. Returning to Marrakech, the driver will accompany you to the hotel / riad, to the airport or, near the medina as you requested. 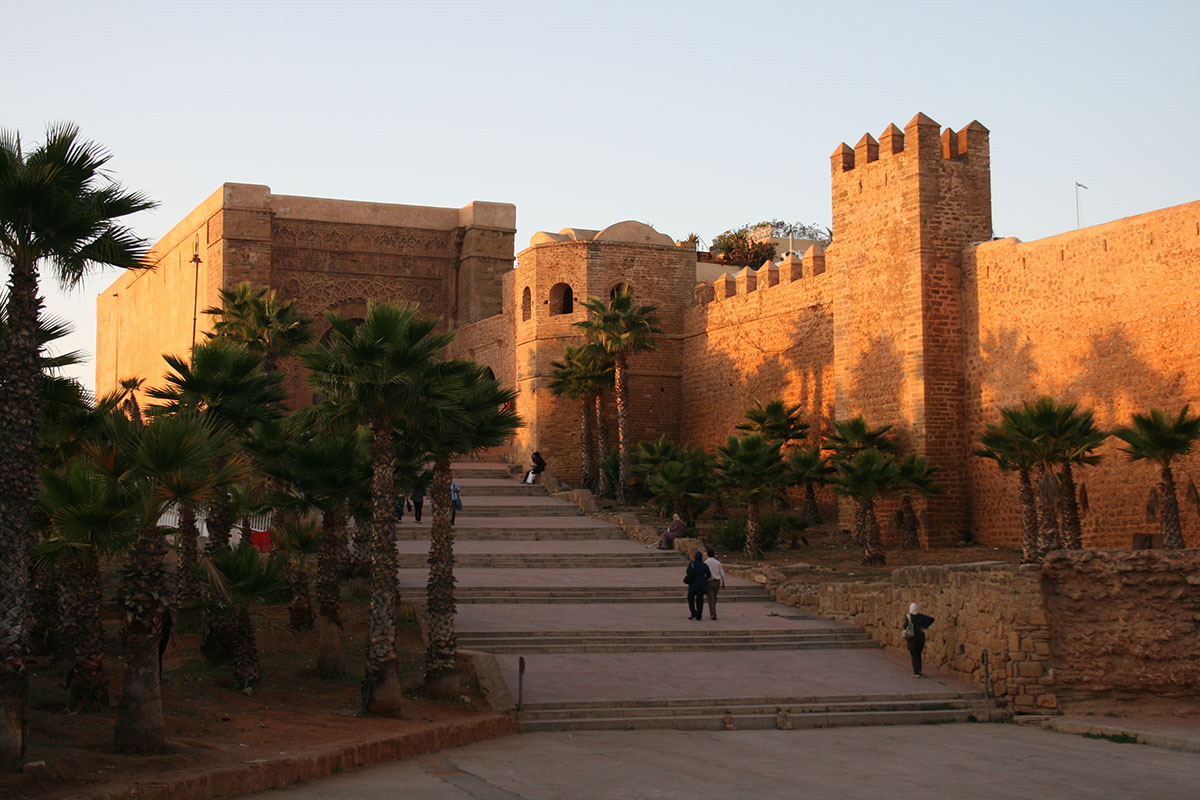 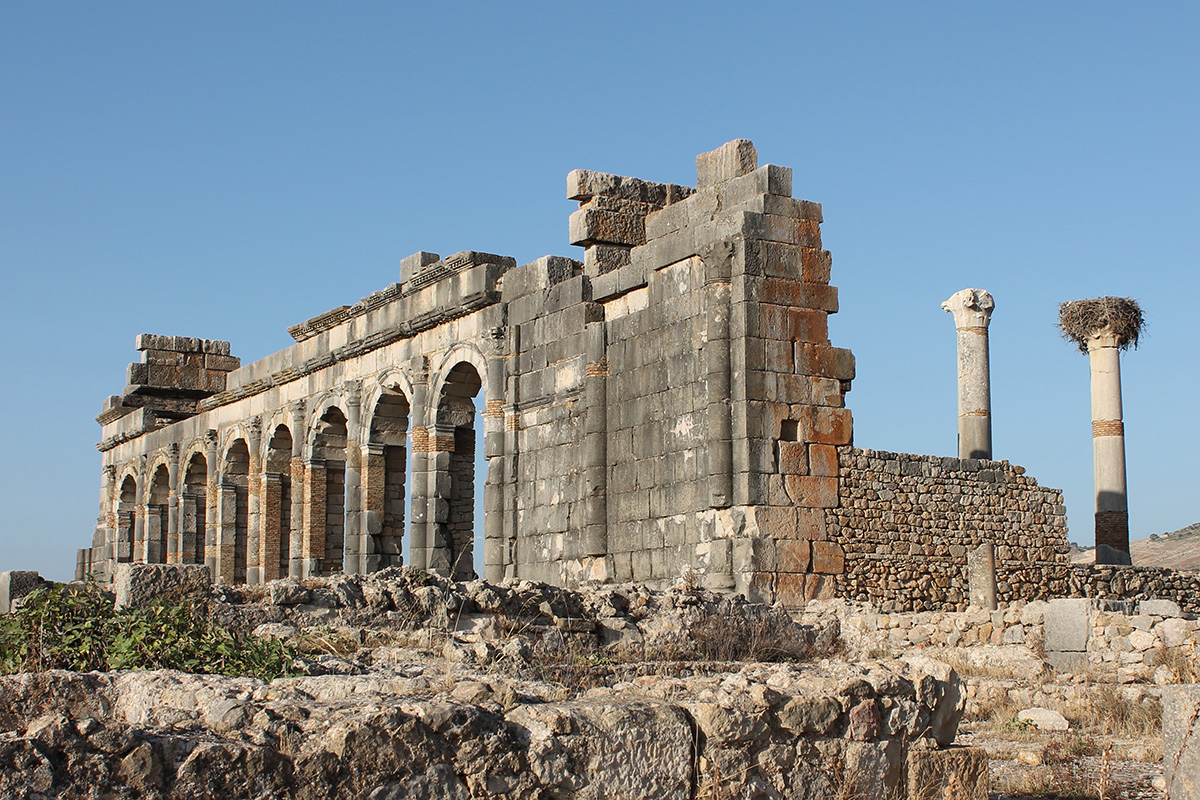 Appointment with the driver at 8.00 am near your hotel / riad and departure towards Casablanca. Leaving the highway and arriving in the modern city, you reach its symbolic site: the Hassan II mosque. After walking outside the mosque to admire its architecture, decorations and exceptional location, visit the interior (compatibly with the opening hours of the mosque). Returning to the road, skirting the ocean you arrive at the town of Azemmour built on the banks of the riverOum Errebia. Dinner and overnight at the hotel.

Breakfast and time at disposal to stroll in the town of Azemmour which every year hosts an event dedicated to street art. The walls of the medina are real canvases on which the artists leave their works. The ocher-colored walls are well preserved and their visit is very pleasant.
With the car you reachEl Jadida located a few kilometers away. The Portuguese cistern kept in its medina is a real architectural jewel and a walk on the fortifications with which the city was equipped at the time of the corsairs offers suggestive panoramas. In the afternoon we take the road again and return to Marrakech. Arrival in the city in the late afternoon.

Means of transport of the latest generation (Mini-van or 4×4 with air conditioning) with driver, for exclusive use. During the excursion you will decide where and when to stop in accordance with the road map. Returning to Marrakech the driver will accompany you to the hotel / riad, to the airport or, near the medina as you requested. 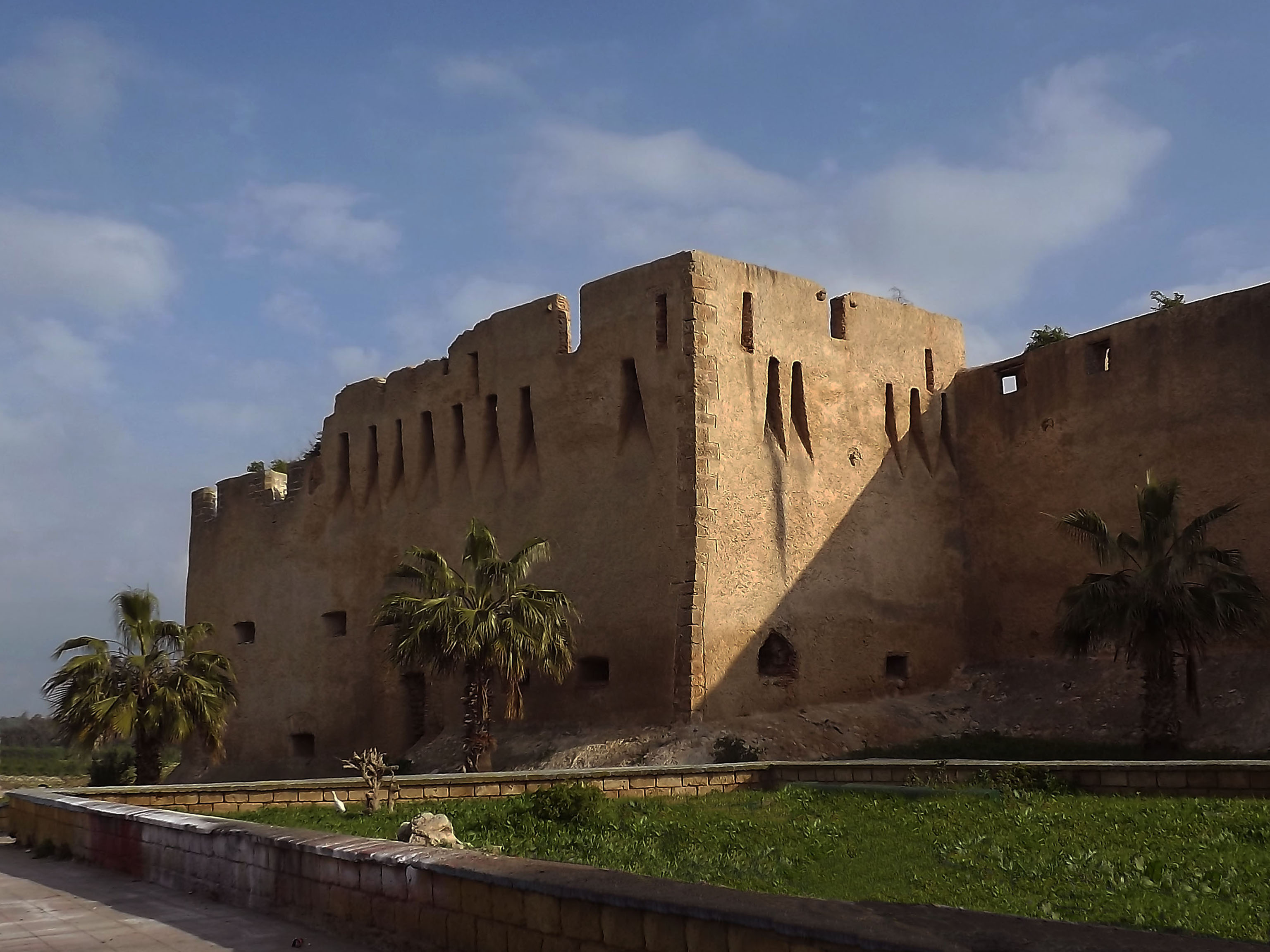 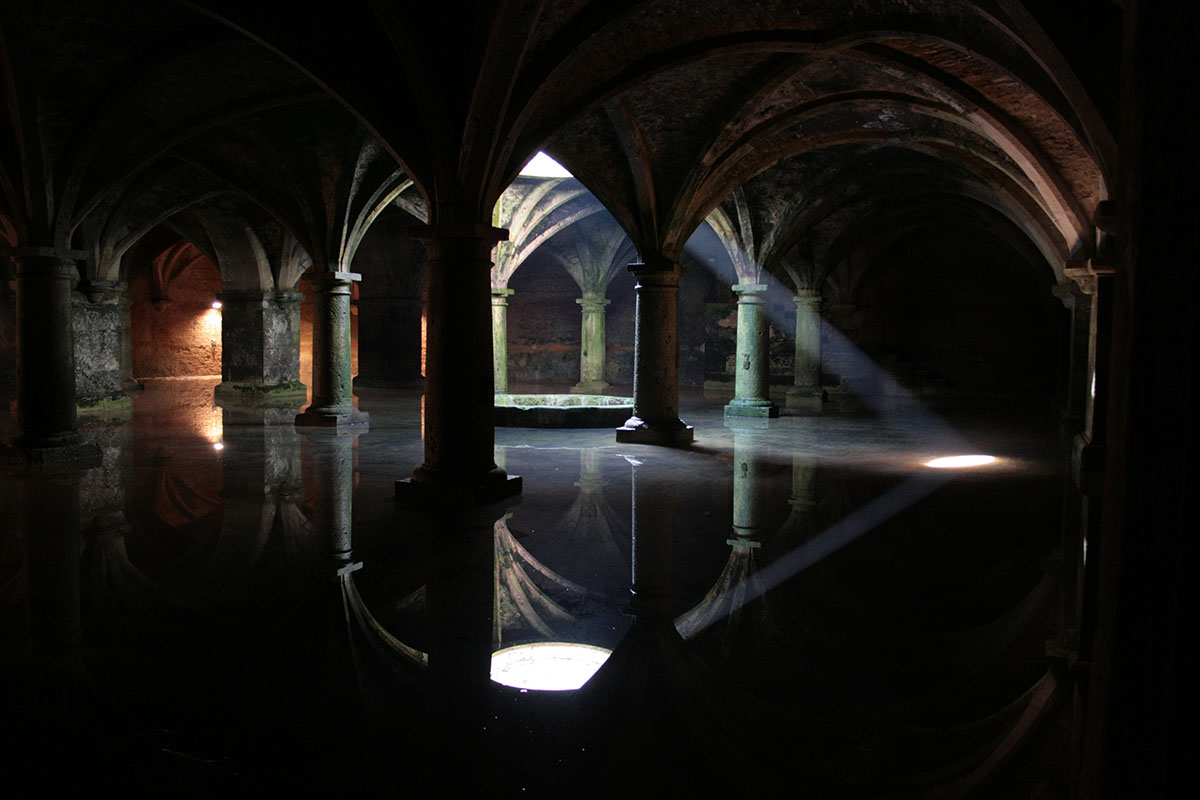